Safety Reminders from the 2013 Melbourne Cup Salmonella Outbreak in Brisbane

Once again, the Melbourne Cup is upon us with promises of elegance, fashion, delicious food and exciting horse racing.

Yet Australians should always be wary when consuming food in a public place, especially if the signs of negligent food handling are obviously present.

This warning comes as a reminder from the 2013 Melbourne Cup food poisoning incident in Brisbane when hundreds of people were reported sick and sadly a 77-year old woman died. Eleven departmental staff members from the office of the Premier and Cabinet were included among the people affected by this outbreak.

The Brisbane catering company that provided catering for 40 different Melbourne Cup events, Piccalilli Catering, released a statement blaming eggs from their supply chain used in their mayonnaise for the outbreak.

A company is liable for their negligent actions against another person if they have a duty of care to that person, they breach that duty of care, and they cause damage. In most cases, a company or venue operator that caters or provides food for a consumer will have a duty of care to protect their consumers from any foreseeable risk that may arise from serving that food.

Salmonella is a type of bacteria that causes a form of gastroenteritis known as Salmonellosis. This affliction can affect anyone and the severity of the symptoms depends on the amount of bacteria ingested, the age of the victim and his/her general health. Thus, very young children, the elderly, or people suffering other medical conditions such as a weakened immune system or malnourishment are more prone to Salmonellosis.

The symptoms of Salmonellosis usually occur between 6 – 72 hours after the bacteria is ingested and may include:

Salmonellosis occurs when the Salmonella bacteria are taken through:

Research suggests that instances of food poisoning in Australia have increased over the past 20 years: 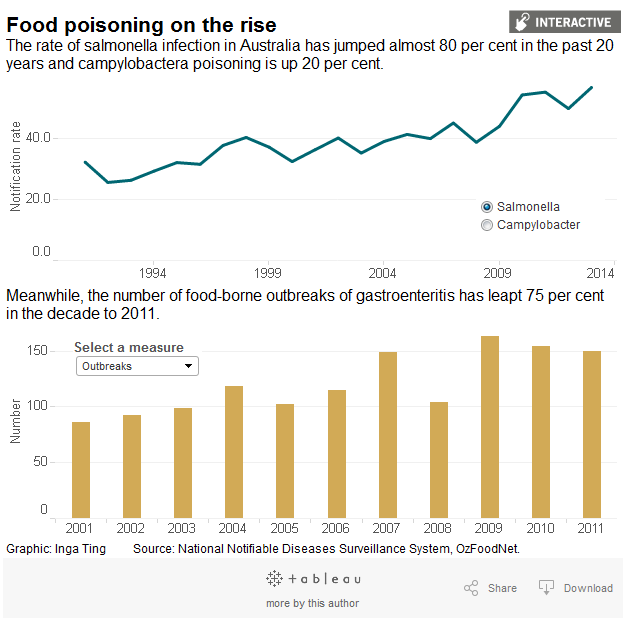 Can Food Poisoning Be Avoided?

The difficulty that arises from food poisoning is the challenge of detection. Most people cannot tell if food is contaminated simply by looking at, smelling or tasting the meal. The bacteria does not change the appearance of food and different methods of cooking may account for differences in taste and whether or not something smells or looks ‘off’.

In general the most common ways for consumers to detect if food is being improperly handled include the following:

Protecting yourself and your family for the 2015 Melbourne Cup

The vast majority of businesses are compliant with food handling guidelines and consumers should not be overly paranoid during this upcoming Melbourne Cup.

However, knowledge of the obvious signs of risk may protect an individual from being victim to a negligent situation by food handlers and venue operators.There is also nothing wrong with contacting a Brisbane personal injury lawyer if you have any questions about your legal rights to compensation.

Give East Coast Injury Lawyers a call by phone at 1300 720 544 or fill out our case review form if you suspect that you have been a victim of a company’s negligent actions.

If You Need a Free Case Review, We Can Help You.

*Strict time limits apply when making a claim. Do not delay.